I'm a member of several teacher groups on social media, many of them created last spring when so many of us were sent home to teach on-screen. I regularly skim posts from these groups because, for the most part, members are there to share and to learn from each other.

Monday evening, one member of a group asked how other teachers planned to spend today, Inauguration Day, and what, if anything, they'd teach their students about the event.  "Praying for our country now that the socialists are taking over," "Nothing- I won't show my students a fake inauguration because that's what it will be," and "I plan to wear all black, but I'm really worried because I'm not sure I will be able to keep from sobbing as I watch this country being destroyed" were some of the responses.

I posted the following:

The first female vice president and no one wants to even mention that accomplishment? How about a rescue dog being one of two pets in the White House? How about the fun title of Madame Vice-President's husband, the first Second Gentleman? Students are going to be hearing some new language- it's our job to help them with this schema. No fear. Just facts.

... at which point another group member tagged me, saying "... oh geez, here comes a unicorn!"

Now if "... oh geez" hadn't prefaced my being called a "unicorn" I would have thought R-O-C-K ON! A fellow teacher gets what I'm saying! She relates to this being yet another teachable moment that can (and should) transcend politics!  But the "... oh geez" gave me just enough pause to realize that it was likely I wasn't being complimented. Once I did a little digging and discovered that being called a unicorn was akin to being labeled a "liberal snowflake" amongst Trumpers, I decided this was an appropriate response: 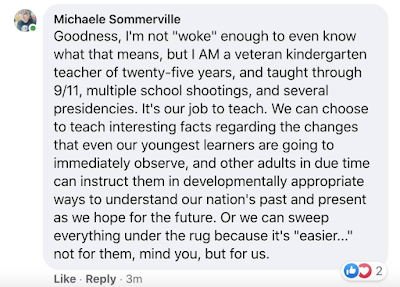 After taking a screenshot of the dialogue (I won't share her identity here), I noticed that the unicorn-labeler's comment disappeared several minutes later. Perhaps she rethought her tone, or maybe she remembered that her comment didn't exactly follow the group's guidelines.  Perhaps simply a page administrator decided to intervene. But after some affirmations from other like-minded colleagues, and the insistance by the naysayers that the inauguration "shouldn't be touched with a ten-foot pole," I resolved to CONTINUE to teach my kindergarteners about what an inauguration is, and to provide a simple introduction to President-Elect Joe Biden and Vice-President-Elect Kamala Harris.
That's right: I've taught my students about presidential inaugurations every four years. I blogged about President Obama's first here, and reflected upon a publisher's message to teachers about content regarding Donald Trump's inauguration here, but I'd also done some deep thinking about Mr. Trump when he was still a presidential candidate.  Caring for my students and their emotional well-being while providing them an introduction to our nation's democracy, curricular content and creating a supportive learning environment have been goals throughout my career.  Providing learners with carefully selected content that communicates factual information and helping them to explore ideas such as leadership are just some of my responsibilities as an educator.  I didn't get to just skip over social studies lessons in 2016 because I didn't like who won the election: I still had to teach.  More importantly, I still wanted to teach.
Yesterday I introduced my Super Stars to the word "inauguration," explaining that it means the beginning or the start of something. I told students that today would be the first day that President Biden and Vice President Harris would go to work together in the White House to help all Americans.  "Oh, like we had the first day of kindergarten?" asked a student.  Yes, just like our first day of kindergarten.  I offered "Maybe Mrs. Sommerville should have called our first day of school together OUR Inauguration Day!" I watched approval spread across my iPad screen as students nodded and gave thumbs-up signs.  I also explained that in addition to reciting the Pledge of Allegiance (just like us!), that our new President and Vice-President would be making another promise to all Americans called the Oath of Office.
Today I shared some facts about President-Elect Biden and Vice-President-Elect Harris.  The Stars loved seeing pictures of Champ and Major, the new White House pets and were excited to discover that our soon-to-be new vice-president had written a book for children. But the biggest wave of Zoom-screen glee and unmuted laughter came when I explained that President Joe Biden's full name was Joseph Robinette Biden Jr.:
Can you imagine, boys and girls, what it must have sounded like when President Biden was a little boy and he did something that got him in trouble?  His mom and dad probably yelled 'JOSEPH ROBINETTE BIDEN JR.!  DID YOU BREAK THIS BLAH-BLAH-BLAH-BLAH?  COME HERE RIGHT NOW, YOUNG MAN!"
They.  Were.  R-O-L-L-I-N-G.
"Mrs. Sommerville!!  What about Kamala?" begged a student.  I explained that "Kamala" means "lotus flower."  My Star snickered before breaking into giggles, saying in her best pretend-parent voice "Oh Lotus Flower, come tell me what happened to my blah-blah-blah-blah!  You might be getting grounded, Lotus Flower!"
Two leaders of our country, who they might never meet in person, were instantly relatable to my class of five and six-year-olds learning from home.  That's all the lesson needed after our vocabulary, truly.
*****
I understand that classes full of students older than mine were going to have more in-depth discussions and voice (or parrot) some uncomfortable thoughts today.  I didn't play any of the inauguration ceremony for my students, leaving that decision to the discretion of their families, and at the request of administrators who wanted to protect students from the possibility of seeing or hearing something unplanned or dangerous.  And I didn't ask why some colleagues were dressed as if in mourning.
I wore red(ish), white, and blue, a charm I made in my crafty nook, and of course, pearls: 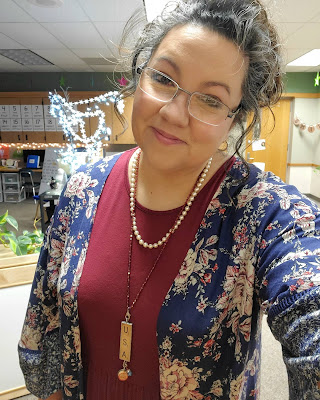 ... and yes, I absolutely checked Etsy for some teacher-unicorn t-shirts, *wink*. 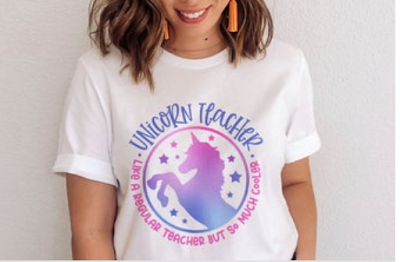 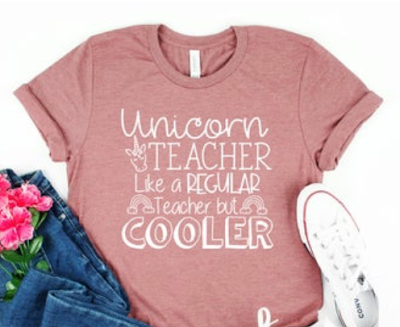 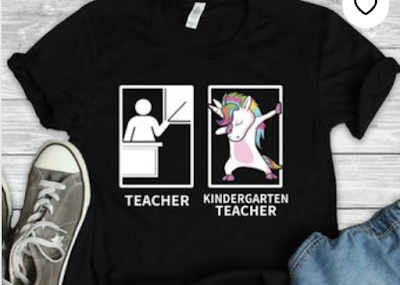